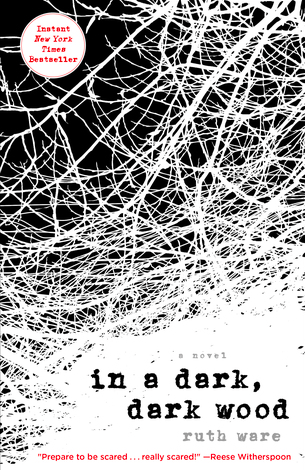 “What should be a cozy and fun-filled weekend deep in the English countryside takes a sinister turn in Ruth Ware’s suspenseful, compulsive, and darkly twisted psychological thriller.

Sometimes the only thing to fear … is yourself.

When reclusive writer Leonora is invited to a hen party in an eerie glass house deep in the English countryside, she reluctantly agrees to make the trip. But as the first night falls, revelations unfold among friends old and new and a haunting realization creeps in – they are not alone in the woods.

Forty-eight hours later, Nora wakes up in a hospital bed injured but alive, with the knowledge that someone is dead. Wondering not ‘what happened?’ but ‘what have I done?” she tries to piece together the events of the past weekend. Working to uncover secrets, reveal motives, and find answers, Nora must revisit parts of herself that she would much rather leave buried where they belong: in the past.”

After reading through rave review after rave review on the back of my paperback copy of this book, I was looking forward to “an enchantingly unsettling thriller” like Shelf Awareness dubbed it. Reese Witherspoon also provided her two cents on the front cover and told the reader, “Prepared to be scared … really scared.” I’m not sure who paid for all of these rave reviews, but the book was, for the most part, a dud.

The book begins with a traditional Halloween tale, which attempts to set up the dark wood setting and plot line:

While this initially provides the reader with some wonder about what is to come next, it really does not provide much else for the rest of the book.

The chapters of the book jumped around a bunch between what happened before the hen night, during, and after the “accident” happened. I found it difficult to orient myself with what had happened. The first three sections of the book showcase this well:

“…I am running through moonlit woods, with branches ripping at my clothes and my feet catching in the snow-bowed bracken. …” (1).

This section is less than one page. The narrator’s thought process of why she is running and the mantras she comes up with are described.

“chapter 1
It hurts. Everything hurts. The light in my eyes, the pain in my head. There’s a stench of blood in my nostrils, and my hands are sticky with it.”
“Leanora?” (3).

After running with the narrator through the woods, she is now realizing and reflecting on the pain she has endured. Was it from the running? Was it from the car that was too close to her at the end of the last section?

“chapter 2
I knew, as soon as I woke up, that it was a day for a park run, for the longest route I do, nearly nine miles in all. The autumn sunlight streamed through the rattan blind, gliding the bedsheets, …” (4).

New setting? Yes.
In pain still? Doesn’t seem like it.
Still running? Not yet. Planning on it.

These small excerpts are the first few pages of the book. When I read this, I was very confused.

This pattern of jumpiness continues throughout the book. The first two-thirds of the novel are slow. Little plot details occur, including meeting the bride-to-be, Clare, and all of her guests at the bachelorette party and them setting up in their different rooms and awkwardly interacting with one another. Not really sure why anyone would want to go to an isolated house nestled away from civilization and go to the shooting range for a bachelorette party, but then again, the setting is in England. They must do things differently across the pond.

Also shown in the examples above is Ware’s strong yet subtle descriptions of every day details. Ware does a nice job of describing every aspect of a character’s look, feelings, and behaviors; actions taken by each character; and the setting. It does drag the book along though, but I plan on reading Ruth Ware’s The Woman in Cabin 10 for this reason. Here’s to hoping the plot line and chapter set up are better in that novel.

The last third of the book is where everything falls into place. A lot of surprises will come for the reader! I’m not going to give away spoilers as to what happens, but buckle up! This is where paying attention during the slow beginning pays off.

I would recommend this book to a reader interested in nontraditional bachelorette parties, especially the ones that go wrong; a character lacking confidence yet along for the roller coaster called Life; and/or dark and twisty murder plots. Those interested in the psychoanalytical side of why and how characters do specific actions would also enjoy this book. The book focuses on a sort of outcast named Nora who gets randomly invited to a hen party for a former friend from high school. Nina, who is one of Nora’s other friends from high school, makes a pact with Nora to attend. Both have no idea what will happen or why the two of them received an invitation.

Nora and Nina’s friendships from the past and present are showcased. Where Nora lacks confidence and certainty, Nina fills it in with her humor, wit, and IDGAF attitude. This provides excellent comedic relief,  which is good because it kept me reading the book because the rest of it was not my cup of tea.

Why Did I Read This Book?

I read this book because I ordered a copy of The Woman in Cabin 10 by the same author from Book of the Month. I wanted to get an idea of what Ruth Ware’s writing style was like as I waited for the book.

This book was #12 for my #SixtyBooks challenge in 2017. I also claimed the Wonder Woman square for Reading Bingo Fall 2017.

0 comments on “Book Review – In a Dark, Dark Wood”

This site uses Akismet to reduce spam. Learn how your comment data is processed.

This work is licensed under a Creative Commons Attribution-NonCommercial 4.0 International License.